After a wondrous time in Ireland, I didn’t realize that my next stop would be another haven for good beer and better times. I took the 7 a.m. Aer Lingus flight to Berlin. Let me just say that I was super excited to be on a flight that only lasted two hours as opposed to the grueling 12 hour flight from Minneapolis to Dublin! The jet lag is far less potent as that trip as well.

But again, I digress.

I landed at around 11 a.m. and went through customs for the 6th time in two months. I don’t speak any German so it was quite the experience as the customs official only spoke a little bit of English. I had purchased an old pipe for my father in Ireland and I think they assumed that I was using it for drugs! After a quick conversation with someone who spoke English I was hurried on my way and caught a cab to my hostel, The Heart Of Gold, near the center of Berlin.

It wasn’t as nice as the Four Courts Hostel in Dublin, but hostels are a lot more expensive in Berlin so I decided to go for affordability over luxury. As if any hostels are actually luxurious! The walls were painted with cool street art and I actually met up with a couple from Fargo, which is about as close to a Duluth resident as I can get!

While I was still a little weary from travel, the invited me to grab a late lunch and brew with them at a bar up the road. I had already used up my transportation budget for the day but they were happy to pay for the cab. I think they were excited to talk to a fellow Midwesterner as I was!

They took me to the Hops & Barley Hausbrauerei , they actually spoke a little bit of German and seemed to have a repoire with bartenders so for the first time in a long time I felt like I was around friends! I grabbed myself pilsner and some good old fashioned German bratwurst. I was so used to eating the bratwurst in Minnesota that I don’t think I’ve ever had something so authentic! 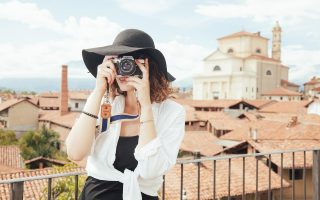 What to Do With Your Travel Photos When You Get Home